Credit: Have A Go

What started in 2010 as a nascent concept, untested in US cities, closed out the decade as a fast-growing and increasingly indispensable part of city transportation systems. Stretching from docked bike-share systems to dockless bike and scooters, the field of shared micromobility has expanded and evolved over the past 10 years. NACTO reports…

NACTO recently released the latest point-in-time look at ridership numbers across this still fast-changing mode of transportation. We found that from 2010-2016 there were 88 million trips taken on bike-share systems across the US. Since then, growth skyrocketed: in 2019 alone, people took 136 million trips. All told, over the past decade, a third of a billion trips were taken on shared bikes and scooters.

2019 ridership is up 60% from 2018, which itself saw twice as many rides as the year before. This year-over-year increase, documented by NACTO throughout the 2010s, suggests shared micromobility systems are continuing to grow in popularity and utility, filling important gaps in transportation networks and playing a vital role in cities. 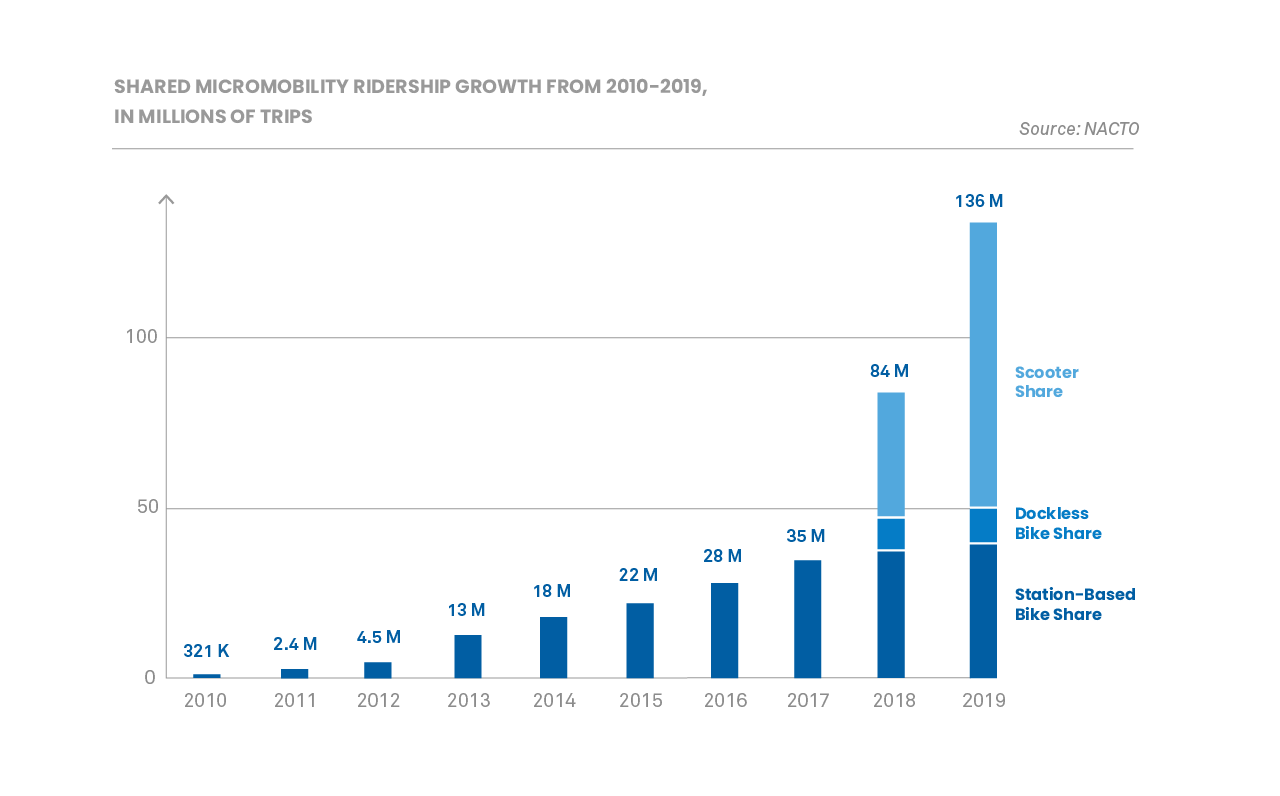 Shifting just a small percentage of these trips previously made by car supports cities’ climate, safety, and equity goals. This is great news for cities that invest in multimodal transport. In many cities, we see a positive feedback loop between shared micromobility, all ages and abilities infrastructure, and increased ridership.

And many of these systems don’t just reduce carbon, they increase access. Across the U.S., cities explored ways to reduce barriers to access for low-income and communities of colour. Programs like the Better Bike Share Partnership help increase access to and use of shared mobility systems in low-income and BIPOC communities. Philadelphia’s Indego Access program expands the reach of bike share, and makes it uncomplicated to sign up for discounted memberships, applying the regulatory power of cities to pursue better public outcomes.

Trips on every mode of transportation dropped sharply, by ~70% nationwide. Interestingly, even as many bike and scooter share systems shuttered completely, the eight largest bike-share systems saw only a 44% drop in ridership from March to April, and have largely rebounded. (This past month, New York City’s Citi Bike was more heavily-used than in July 2019, even with most white-collar workers not going to the office).

Compared to what we saw in 2019 and earlier, rides are now more spread out, with different commute patterns, more errands by bike, as well as increased recreational/social riding. Bike share in 2020 is also a tool of civic engagement and social change, with many systems expressing solidarity with, and waiving fees at #BlackLivesMatters protests.

Where do we go from here? While much is uncertain, shared micromobility, while volatile and evolving, is here to stay (with continued support). Short trips in cities are important, and these systems fill a much-needed gap. They extend the reach of transit, and make cities more accessible overall.

Over the past decade, and especially in 2020, we’ve also seen that the most successful systems are the ones where there is strong, reliable partnership between the city and operator. These partnerships create and support equitable distribution requirements, free and reduced fees for essential workers, and general system reliability, and other policies that are essential to meet city health, equity, mobility, sustainability, and resilience goals.

For more on how to use shared micromobility to meet city goals, see the wealth of resources available through NACTO’s Bike Share & Shared Micromobility Initiative and from the Better Bike Share Partnership. And check out this year’s shared micromobility ridership report (a fraction of which was covered in this blog post). See you at the dock, at a corral, in the bike lane, and on the street!