The UK is facing a ‘transport crisis’ and requires ‘urgent action’ according to Pure Electric.

The micromobility firm has written to the Government urging them to prevent the UK from being overwhelmed as commuters return to work and children return to school next month.

While cycling and walking activity increased during the initial lockdown period, and public transport usage remains well below 50% of the norm, data shows that car and lorry use is already rising back to familiar pre-COVID levels.

From September, almost nine million schoolchildren are expected to return to school, and a month later, the end of the furlough scheme will see almost ten million look to resume employment. 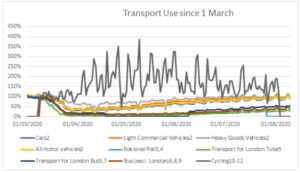 Tom McPhail, director of public affairs, Pure Electric, said: “People need to be able to get around, kids need to go back to school and we all need to get back to work. Public transport is running at between 10% and 40% capacity and over half the seats aren’t being used.

“Anyone who has travelled on a busy underground, bus or train at commuter time knows social distancing is going to be impossible without vastly reduced numbers; so we need to create extra capacity.

“The only possible solution is micromobility. We need to offer alternatives to public transport and cars. For some people, cycling and walking will work but not for everybody. E-scooters and e-bikes can play a huge role in mitigating this crisis.”

Pure Electric is urging the Government to:

– Sanction private scooters for immediate use on public roads and cycle paths but not pavements
– Police should be instructed not to interfere with anyone riding a scooter safely and responsibly
– Make clear any irresponsible or reckless behaviour can still be punished under existing legislation
– Conclude the scooter trials as quickly as possible and start working on legislation to formalize the legal use of e-scooters in towns and cities across the UK
– Extend the cycle to work scheme to cover e-scooters
– Scrap VAT on e-scooters, bikes and e-bikes for the next 12 months
– Introduce a car scrappage scheme to replace old high-polluting vehicles with vouchers for low carbon transport such as e-bikes
– Introduce a ‘cycle to work scheme’ allowing tax-free purchase of micromobility transport for retired people, to enable them to access low-cost solutions as well as working-age people

“Back in May, when the scooter trials were first consulted on, a one-year trial made sense,” added McPhail. “Even in June, as the DfT finalised its plans for the trials, there was hope the economic shock caused by COVID-19 would be short and sharp; the so-called V-shaped recession: this now looks increasingly unlikely.

“With the UK economy shrinking by over 20% and millions facing unemployment, the Government has to reprioritise and act fast to give people every possible opportunity to get the country back on track. Hundreds of thousands of people would make use of electric scooters if given the green light to do so by the Government. Everyone who did so would be one less car on the road.”