The Ridgeback MK5 is the brand’s "biggest cargo bike yet"

Ridgeback has expanded its range of e-bikes.

The brand said it wants to offer the “most versatile and dependable” range that it can in this category. It now has 18 e-bikes in the line-up, to cover all types of rider from “a courier right through to a casual Sunday cyclist”.

The range includes e-cargo bikes – the Butcher, MK5 and Cargo-e – the largest of the three being the MK5. Both the Butcher and MK5 run off the Promovec system, which is a new e-bike system that Ridgeback has started using alongside Shimano Steps and Sport Drive. 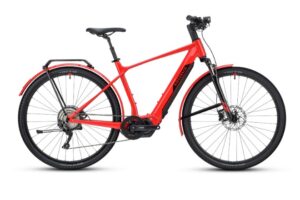 The other new, flagship e-bike is the Advance, with an integrated battery in the downtube, running off the Shimano Steps E6100 system.

With mudguards, racks, 63mm of front suspension and a light, the Advance is available in red or grey.

The new range of bicycles is available to see at www.ridgebackbikes.co.uk.