Knaap Bikes on entering an industry during a pandemic 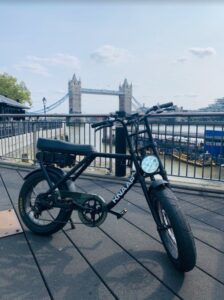 Being a newcomer to an industry can be tough at any time – let alone in the middle of a global pandemic. The lack of events over the past 12 months has meant fewer opportunities to network and introduce new products and engage with them, meaning it has been challenging for those wishing to enter the market.

Knaap Bikes, winner of the 2020 BikeBiz Innovation from a Newcomer Award, has seen ‘rapid acceleration’ in the UK since its rollout, recently celebrating reaching over 120 dealers across the UK. The two-seater 140-kilometre range 180-kilogram capacity e-bikes come in matt black or space grey and retail at £2,299.

“Robin Cats, who founded Knaap, comes from a scooter background out of Holland, working with scooter hire solutions around the globe,” says Steven May, UK country manager at Knaap distributor JDM Products. “He saw an opportunity in a more robust product proposition that captured that stability, the ability to ride two people on it and potentially widen the market from scooter into bicycle.

“When I rode the bike for a week, I stopped using my car. Every time I rode it people would turn their heads, stop and go: ‘Wow, nice bike mate, where’d you get that from?’ I was genuinely shocked. I’ve never ridden a bicycle that’s turned people’s heads before. The JDM involvement was to look at the brand,  see the opportunities, spend the first week riding it and understand where I thought it fitted in. And then with the Knaap team, we started to profile the target consumers into four categories.”

The first of these categories is ‘urban fashionistas’, May explains, which is people who ‘like to be seen on it as much as ride it’. The second is urban commute, which is the one and two-rider solution for commuting. “And that’s not just central city commuting, it’s also towns,” May says, “because that journey doesn’t have to be less than five miles, it can actually be more because it’s a pleasant ride.

“The third [category] is what we call leisure and recreation, which is like the weekend bike. It’s the second mode of transport outside of a car. Because it carries two people, it gives you the ability, as a couple, to go on the bike for those short two to five-mile rides that you do, or journeys that you would do in a car, that you can now switch comfortably onto a bike. The second half of that leisure category is motorhomes, camping and caravanning, where you go away to be away and not use your car.”

The fourth category is commercial and hire – the commercial side being able to make last-mile deliveries to customers. “Because of the pandemic and everything that’s happened with localised delivery solutions, that last mile is actually extremely valuable,” continues May. “If you think about your local pub or restaurant, who are doing food deliveries now, every one of those is doing it in cars, whereas their delivery radius is only a few miles.”

Partnering up
Knaap Bikes now has north of 120 independent cycle store partners in the UK, May continues. “The concept is to minimise their risk in the beginning, by allowing them to purchase a single bike solution so they have a demonstration bike. That means that we’re not asking them to pay upfront or commit to a whole bunch of stock that they’re not sure how well will sell.

“But what we’re looking to do is a partnership. We have a dropship model, which means that they can have their demo bike and get their next bike within 72 hours for a customer. So the customer can ride it, say yes and then within 72 hours the bike can be with the store team.”

That partnership also means that all online sales go back through the partner dealer network as click and collect. “So literally pass the contact of the customer, the customer goes in for the demo and completes the sale directly with the retailer. For us, that’s a massive part of the partnership. We have a two-year warranty, and on the warranty, we pay the dealer for the labour. If there’s a claim, it will be paid for by Knaap to the dealer. If the customer has an issue with the bike, we will resolve that problem directly. It’s about building the partnership with the dealers that come on board early and maintaining that over a longer period.”

Ground zero
Knaap Bikes won the 2020 BikeBiz Innovation from a Newcomer Award – an event that took place digitally due to ongoing restrictions. “Absolute elation is what we all felt when we saw it pop up on the screen,” says May. “It’s hard at any time for a newcomer to enter an industry, but when you enter an industry in the middle of a pandemic, you plough around probably 250 cycle stores and you’re not able to attend an industry event where you could network or engage with potential new customers who could walk past and see your product – we really were starting from ground zero.

“To win the award after three and a bit months of doing this was, for me, a tremendous recognition of the efforts that I’ve made from the industry – because it was the readers that voted. Most of the people I must have visited actually clicked the Knaap Bikes piece so it was a recognition that I’d been around and done the work in a very short period of time, but also that what I was saying had resonated with the industry representatives.

“From the Knaap Bikes HQ team, Robin and Michael [Fiering] were absolutely over the moon with winning the award; not least that I’d applied for it, knowing the work I was going to do from the beginning and knowing that I was going to put all of that effort in. The product that they’d created actually had a very strong affinity with the potential customers – potential retailers and consumers.”